As an American, one of the most immediate differences that I experienced between everyday life in Moldova and that which we had become accustomed to in the U.S. is perhaps best exemplified in grocery shopping. As a general rule, things just take longer here. All of the little timesavers that we take for granted in the states really do add up in the course of an ordinary day.


For example, in the U.S., I would usually drive to the local supermarket about once a week and come home with a trunk full of groceries an hour later. Once a month, give or take, we'd take a twenty-minute drive out to the mega-warehouse wholesale store, where everything comes in bomb shelter size and the labels usually feature exclamation points (Our Biggest Size!), and we would stock up on staple foods and other items of convenience. Seldom were we unable to find what we were looking for, and if we did it right, we could usually get most things on sale.


In Moldova, groceries cost roughly the same as they do in the United States, with the notably inexpensive exceptions of bread, seasonal produce and fresh meats from the Piaţă Centrala, which is the central open-air market in Chisinau. In theory, you can find just about anything you need there, so long as you know where to look. As far as I can tell, though, there's hardly any discernible semblance of organization among the vendors at Piaţă Centrala. At one table, a person is selling batteries and light bulbs, and right next door, someone's selling bananas and pomegranates. Couple that with the fact that there's foot traffic moving in every direction and it's difficult to stop and turn around without body checking some little old lady, it can be a bit chaotic, to put it mildly. Nonetheless, if you want to find a good deal and aren't afraid to haggle, this is the place to do it. 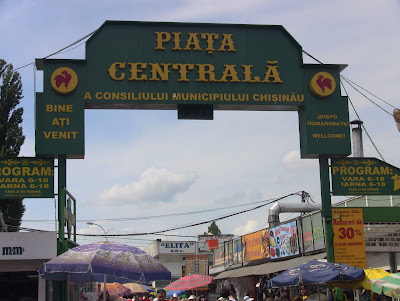 Of course, we can never find everything we need at the market, even though we know it's all probably there somewhere, so shopping day literally does take all day, often several. I pretty much only buy meats from the vendors at Piaţă Centrala, because I know it's fresh (the chicken usually still has some of its feathers), though we do usually get some if not most of our vegetables there as well. We get the rest of our produce at a store called Uno, which is set up somewhat like the central market, except it's inside, the selection is significantly more limited, the prices are a little more expensive, and there are a lot less people to contend with. However, it's worth noting that Uno is only a couple of blocks away from our apartment, so it's an easy walk, even with an armful of groceries and two young kids, whereas Piaţă Centrala is probably about a half mile away. 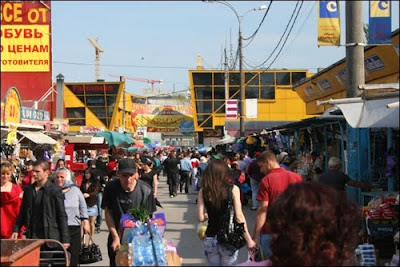 With this in mind, even closer still is Green Hills Market, which resembles more of a grocery store like those which we have back home. They even have peanut butter there, which is apparently an odd rarity outside of the U.S. This is where we get a lot of our day-to-day items such as milk, frozen vegetables, water, etc. Our landlord also gave us a discount card to Green Hills with the keys that unlock our front door. This helps make prices there a bit more reasonable, though they are still somewhat inflated relative to their U.S. counterparts. The general rule is that things made in Moldova are cheaper here, such as sunflower oil and wine, but a disproportionate number of items are only available by import and are therefore more expensive than they would be in the U.S., though often just marginally. Exceptions include sweet potatoes, walnuts and corn oil, among others, all of which are ridiculously expensive. Furthermore, there are, of course, things that just don't seem to be available here, like cake mixes, soft pretzels and baking powder, to name a few.


The other store that we go to is Fidesco, which is also a very westernized grocery store, but it requires taking a maxi-taxi if we're not up for an even longer walk with several bags of groceries. The main thing we get there is bread, for which Jamie has a preference from this particular store, but in general, prices there are about the same for most items as they are at Green Hills.


With that, I'd like to indulge in a brief tangent. Have you ever noticed how most cities in the United States have at least two grocery stores (or chains of grocery stores), often owned and/or supplied by the same companies, yet one store has higher prices and better looking produce than the other? I'm convinced that this works to reinforce social segregation by offering separate stores for the rich and poor, so that their carts don't ever meet in the aisles, thereby effectively preventing them from sharing in this most personal of American experiences.


Back to the topic at hand, when all is said and done, it usually takes four separate trips to get enough groceries to last all week for a family of four, but we're also limited by that which we can comfortably hold, considering that we have no personal vehicle here. For this reason, grocery shopping usually requires that we all go, so that Jamie and I can both carry the bags, even though that means that Alexander and Chloe have to go with us as well, which often brings with it its own set of headaches. Frankly, to visit all four locations with the kids in one day would be borderline insane, so more often than not, at least four times a week, a good portion of the day is dedicated to grocery shopping. Ironically, shopping in the U.S. was little more than an afterthought.


Once we get it all home, of course, cooking brings its own set of challenges, which I've alluded to elsewhere. The lack of simplified ingredients (i.e. taco seasoning, pre-sliced bread, etc.) as well as the requisite metric conversions and our near unwillingness to invest in cooking utensils that we'll more than likely have to leave behind at the end of our time here take a lot of the casual fun out of cooking, at least for me. Many of the signature dishes that I've improved over the course of many years of repetition and refinement are next to impossible to reproduce here, so it often feels as though I've forgotten how to cook.


Then there's laundry, which is a bit more of an ordeal on account of the strange absence of clothes dryers here. People use clotheslines on balconies or in public playgrounds, or in our case, we have a small drying rack in our bedroom. This means that it usually takes at least a day for clothes to dry and can only be done one load at a time, so pretty much every day, at least a half hour is dedicated to hanging and folding clothes. 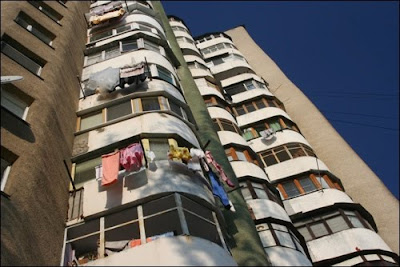 Add it all up, and it makes for significantly less time in the day to put toward being productive. Oddly, it seems like I got more writing done in what limited spare time I had back in Illinois versus what I've been able to accomplish here. Granted, we also presently live in a smaller space, and with a teething baby and what I would otherwise appreciate as good acoustics, it can feel very small indeed. We have now been in Moldova for nearly three months, and although the weeks here seem longer, the days seem much shorter.
Posted by Zach Sands, PhD at 2:41 PM