For the past three weeks (minus the second week, due to a family trip to Italy and Germany), on a voluntary basis, I've been teaching conversational English to a group of Moldovan college students. For most of them, it's a chance to use the English that they've already learned so that they don't forget it, and for me, it's an opportunity to continue teaching simply because it's something that I love to do. Besides, the primary mission of the Fulbright program is to promote mutual cultural understanding, and this seems like an excellent chance to do just that. So far, it's been a lot of fun. 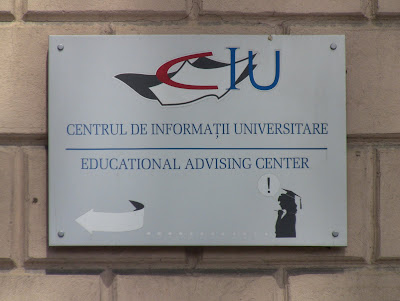 Each week, I pick a topic, and then we discuss that for the better part of an hour. This past week, due to the proximity of Christmas, I suggested that we talk about holidays in the U.S. and Moldova. Statistically, Moldovans overwhelmingly align with the Eastern Orthodox sect of Christianity, but on a political level, they are also making moves to fit in culturally with the European Union, so as a result, they celebrate two Christmases here. The first is on December 25, but then the traditional day of celebration is reserved for January 7. This is because the Eastern Orthodox church still works off from the Julian (as opposed to the Gregorian) calendar, which differs by a matter of thirteen days. In any case, from what I gathered, many of the traditions aren't all that different to what we're used to in the United States. They sing songs, families come together, and gifts are exchanged, all in a general spirit of goodwill toward one another.

As our class discussion progressed beyond the similarities and differences between holidays here versus those in the U.S., one of my students asked me if I am Catholic, Protestant or Eastern Orthodox, as if those were my only three options. I should note that topics that may be taboo elsewhere tend to be addressed matter-of-factly here. She was nonetheless taken aback to learn that I am in fact none of the above, but that we still celebrate Christmas with presents, songs and dinner. "How can you celebrate Christmas if you're not a Christian?" she asked.

"We do it for the kids," I told her, fully aware of just how foreign and how uniquely American that must have sounded. "For us, it's really just about family." It could have been worse, I suppose. I could have offered a diatribe about how this is really just a time of year reserved for buying each other things we want but don't really need and that maybe the world would be a better place if people maintained that same altruistic spirit twelve months a year... but then again, it was a valid question that I've asked myself before.

Festivus, anyone?
Posted by Zach Sands, PhD at 5:05 PM