On the flight from Frankfurt to Chisinau, we were served snacks that seemed more like the sack lunches that we used to bring to school as kids as opposed to any kind of cliches that may come to mind in terms of traditional airplane food. The attendants gave us fresh cheese and vegetables that tasted like they had been picked from a garden only hours before. To my surprise, many of the other passengers seemed to be American.

When the plane touched down, we got on a bus which took us to the airport terminal, where we then stepped in line behind a hundred or so other passengers who were waiting to clear the passport checkpoint. For the first time in over twenty-four hours of travel, Alexander began to fuss, which is the only reason that I can think of as to why we were escorted to the front of the line. Within a few minutes, we were past the checkpoint to the baggage claim, where all four of our checked bags had made it all the way from O'Hare and were there waiting for us. (Jamie and I had made a bet about this, and it looks like I won, which means that when we get back, she's going to have to write me a check for two bucks from our joint account.) In any case, airport personnel helped us load our bags onto a cart, then escorted us through customs without so much as a word to the guards as to whether or not we had anything to declare. Here, we met Tanya, who held a sign with the name of the woman from whom we had arranged to rent a temporary apartment. Boris, the driver, took our cart from the airport personnel and promptly loaded our luggage into his mid-sized car. 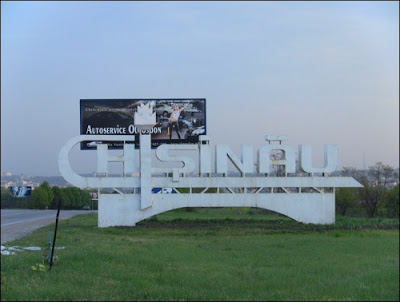 Boris took us to an old Soviet-era apartment building with an unpleasant but indistinguishable smell in the lobby and hands-down the scariest elevator that I have ever been in. We could only fit two bags and one person in the elevator at a time, and it dropped three inches when we stepped inside. Tanya informed us that although the apartment that we were staying in was on the eighth floor, we had to press nine in order to get there. "This," she said, "is Soviet engineering." She spoke English remarkably well. 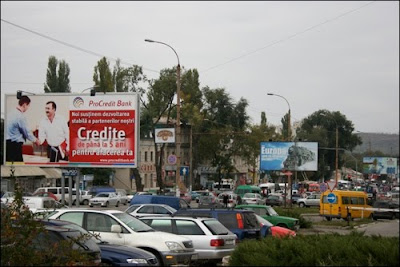 The next morning, we arranged to meet with an old Ukrainian woman named Varvara, whose contact information I had received from the U.S. Embassy. She showed us about five apartments and also introduced us to a woman named Vera, who showed us one apartment and then another on Sunday, the latter of which we moved into on Monday.

It is probably the most secure apartment that I have ever lived in. It is only accessible via a mechanical gate which is situated next to the guard station, and the door of the building and that of the apartment itself are two of the heaviest that I have ever seen on a residential property. The apartment is well-lit, with tall ceilings featuring numerous skylights in every room as well as ornate lighting fixtures throughout. Frankly, it's not quite as big as the place where we lived in Illinois, but it is quite a bit fancier. Alexander and Chloe are in one bedroom and Jamie and I are in the other.

The apartment is also centrally located. We can easily walk to any number of grocery stores and street markets. There's even an electronics store just down the street where I was able to get a monitor for our computer as well as some other miscellaneous stuff that I thought would be harder to find here. So far, nearly everything that we have needed, we have been able to find without much difficulty.

On our second day here, I also managed to contract a staph infection in my nose, which rendered me into a boardwalk caricature of myself, and I was able to find the necessary antibiotics at the local "farmacie" for the equivalent of about twelve bucks, no prescription needed. 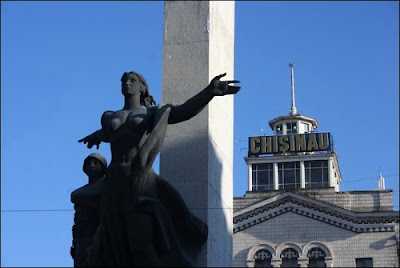 In terms of expectations that have been proven false, before we came here, I was under the impression that although Romanian is certainly good to know, most people who went to school in 1989 or later are fluent in English. This is absolutely not the case. In fact, based on our experiences so far, it seems that about half the people speak Romanian and half speak Russian, and most do not seem to be fluent in both. Furthermore, aside from the people at the U.S. Embassy, we have only met three people who are fluent enough in English that my explanations do not require elaborate hand gestures in order to articulate. It also seems that most of the hundreds of flash cards that I made and memorized may not be terribly useful in a practical sense, at least not until I have developed my ear enough to actually understand what people are saying. As for Jamie's Russian, unless a need should arise for "The boy swims," or "The horse walks," she's going to need to work on that as well. She did, however, catch the word for "stupid" when we were trying to explain to a cab driver where our apartment was even though we did not yet know the address. So now we can check "being yelled at in Russian" from the list of experiences.

In terms of first impressions, though, I will say this: I like it here. That's not to say that there aren't plenty of things I miss about the United States, but as a temporary residence, it could be a lot worse. It's very green here, people smile a lot more than you might expect of Eastern Europeans, and the food is amazing, particularly the produce. For me, the hardest adjustment so far has been the fact that this is very much a cash-based economy. In the U.S., I had grown very used to never carrying any money on me and just paying for everything with a debit card, and although there are a surprising number of places here that do accept credit cards, most things are paid for in cash, including rent and utilities. That has already taken some getting used to, as does the fact that the exchange rate is approximately 11.5 to one - so not only am I carrying money everywhere I go, but I am also carrying a large quantity of bills. I also have to do a lot more math in my head in order to figure out if I'm getting a good deal or not. Of course, I'm also getting better at haggling, which is a skill that I've never really had to use before.

Moldova's annual wine festival is this weekend, and I'm hoping to get some good pictures as well as my first video clips to potentially be used in the documentary. Wine is one of Moldova's biggest exports, and the wine festival is one the biggest annual events here.
Posted by Zach Sands, PhD at 3:59 PM