A Drive in the Country

On Thursday, we went to the world's largest underground wine cellar. Milestii Mici, about fifteen miles south of Chisinau, has over 200 kilometers (124 miles) of tunnels. These are former mine shafts that have been converted into storage facilities, which now house nearly two million bottles of wine. This is to say nothing of the giant barrels where the wine is aged before it is bottled, either. At one point in its history, this was the headquarters of much of the wine production for the former Soviet Union. When the U.S.S.R. collapsed, they lost a lot of their business, but even today, they continue to manufacture world-class wines that most of the rest of the world, it seems, has never heard about. 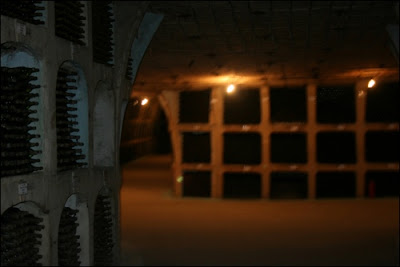 We had to rent a car in order to get there, and then we also had to drive the car through the tunnels in order to get to the various points on the tour. Of course, driving in Moldova was an experience unto itself. Imagine Los Angeles or Chicago without lines on the road and the added obstacles of giant potholes everywhere. This is what it was like driving in Chisinau. I should also note that they don't have street signs here. If you want to know where you are, buildings at corners often (but not always) have the names of each of the cross streets either painted or attached to the respective outer walls. They're not usually all that easy to see, and next to impossible at night.
Once we got out of the city, the traffic eased up considerably and lines appeared on the road that at least separated us from the oncoming cars, which were relatively infrequent, but certainly present nonetheless. To minimize the risk of getting completely lost, after we left Milestii Mici, we stayed on what I would consider to be a main road (in that it was paved) and made note of landmarks whenever we veered off from our path. 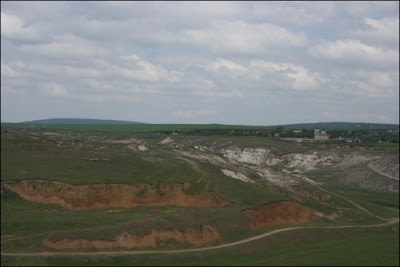 It was interesting to pass through these villages that speckled the otherwise unadulterated countryside. It would have been easy to forget what year it was as we were given glimpses into these lives which had likely changed very little over the past century or so. In most of the villages that we passed through, every hundred yards or so, there was a community well where people got their water for drinking, cleaning and cooking, and outhouses were a common sight beside their homes. There were power lines which ran along the main road, though, and I saw a surprising number of satellite television dishes. It may not be quite as rustic as I had imagined it would be in some of these villages; rather, it just seemed like a relatively simple life. This isn't to say that life in the Moldovan countryside isn't without its challenges, to be sure, but seeing what little we had the opportunity to see provided an interesting insight into the reality of our modern needs.
As Jamie wrote about in greater detail in her blog, our excursion ended at a Pizzeria/wedding hall in some relatively remote village about an hour outside of Chisinau. Oddly, it almost became as if we were the tourist attraction. The waiter brought the cook out of the kitchen to see the American family in the otherwise empty dining room. He even called his friend who speaks English, then handed the phone to me. Not knowing what else to say, I asked him how you say black olives in Romanian, then I said thanks and handed the phone back to the waiter. I don't even like black olives.
After we had eaten our pizza, the owners of the establishment had essentially taken us in as surrogate children and grandchildren. The woman insisted that Alexander's name is actually Sasha and didn't seem to want to let him go when it came time to leave. She gave Chloe a candy bar and an apple and gave Jamie some flowers that she had pulled right out of the ground. They were truly lovely people, and again, I wish that my Romanian was better so that I might have aptly been able to thank them for their kindness and generosity. Even with the language barrier, though, where communicating simple ideas requires a quick game of charades, I think they understood at least as well as we did.
Posted by Zach Sands, PhD at 8:18 AM