A couple of nights ago, I woke up at about two a.m. with a terrible pain in my abdomen. As a rule, I try to avoid medical treatment unless absolutely necessary, no doubt a result of having gone several years without health insurance, but this was an incredibly intense and unfamiliar pain. Concerned that it may be something very serious, Jamie called a taxi to take us to the hospital.

The driver asked us what hospital we wanted to go to, and I told him that I did not know, so for better or worse, our fate was left to his judgment. Ten minutes later, we were at the door to the emergency room, which I soon learned was where the doctors on the night shift like to smoke.

Inside, compared to Western standards, the conditions were squalid at best. After being completely ignored by the receptionist for about ten minutes, I approached a nurse and explained to the best of my ability that I had an intense pain in my abdomen. She took me to a small room where I was advised to lay down on a gurney. The sheet was stained and torn, and the room was nearly filled to capacity.

The man on the bed across from me seemed noticeably intoxicated, but his swagger and slurred speech may have also been a result of the bloody wound on the back of his head. From what I discerned through awkward pantomime as the man pointed to the hallway, then made raspberries with his mouth while rubbing his thumb and forefingers together in the universal sign for money, only patients who could afford it received adequate service. 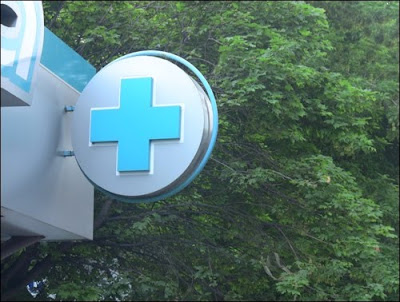 After peeing in a cup that was still wet from having recently been rinsed, I was surprised to be greeted by a urologist who spoke fluent English. His first question was whether or not I had insurance. I told him that I wasn't exactly sure how or if my insurance worked, and he explained that it would probably be easier if I could just pay cash. He said that there would be less paperwork that way. I wasn't really in a position to argue, nor did I want to deal with what I perceive to be a characteristically crooked American insurance company, so I agreed to pay cash for services rendered.

When I told the doctor that I was an American, he apologized for the conditions of the hospital and he promptly had my wife and children wait in his office. As he explained, "This is not a good place for children. This is a place for drunks and criminals and stupid people." From there, he escorted me to a room where I was given two shots: one was a pain killer and the other was an anti-inflammatory drug. Then he took me to the various labs, where first a blood sample was taken, and then I received an ultrasound and two x-rays.

When it was all said and done, he told me that it looked as though I had a kidney stone, and that there wasn't any reason to think that this was anything but an isolated occurrence. Nonetheless, he reminded me that I should drink a lot of water and try to avoid pork, both of which I tend to do anyway.

The total bill for services rendered, not counting the two dollar cab rides to and from the hospital was seventy-one lei, which equals a little less than six bucks. All facts considered, the service that I received here, aesthetics of the hospital itself notwithstanding, were actually equal to or better than that of any clinic or hospital that I've been to in the U.S. The urologist was every bit as professional as any American doctor that I have encountered and the lab technicians were equally good at their jobs.

After he called me a cab, the urologist explained that if I had any additional symptoms or if the pain persisted, that I should probably go to the Republican Hospital. He said it was cleaner there and that more of the staff speaks English. Yes, I actually heard the word "Republican" and positive statements about health care mentioned in the same sentence.

In any case, would I want to go to this hospital again if I had or a more serious ailment? It is hard to say. Would I want to take my kids there if they needed any kind of medical treatment? Probably not. But at two in the morning, with the equivalent of about twenty bucks in my pocket, it could have been a lot worse. I could have been a thousand dollars in debt for what amounted to a couple of shots and the simple assurance that I was going to be alright.

After doing some research into the matter, I now have reason to believe that it's actually because I drink a lot of water that I got the kidney stone in the first place. You see, the water here contains a lot of calcium and other hard elements, and it seems that our water filter probably should have been replaced a few months ago, as it was doing little good anymore. Now that I have replaced it, our filtered drinking water is considerably less cloudy, and with any luck, this experience will not be repeated.
Posted by Zach Sands, PhD at 2:24 PM