Please note that this is just my personal opinion and that I mean no offense by this, but as a musician myself, I can't say that I have all that high of a regard for what I perceive to be terrible Russian techno music. I say this because a.) I don't really enjoy club dancing, and b.) I have a pretty good idea as to how much work and/or talent goes into the production of this stuff. That is to say that if I sat my four-year-old daughter in front of a computer with Fruity Loops or Rebirth or any number of programs like this open, with a little bit of help, she could produce something that is roughly the same caliber as most of the stuff we hear around here. It is atonal, beat-driven crap. If there are vocals, oddly, they are usually in English, which makes me embarrassed for my language if this is all some people know of it. The vocals are also incredibly over-produced, polished to death by auto-tune. There are, of course, exceptions, and I do try to listen to all music with an open mind, but I cannot get around the fact that this music, to me, barely qualifies as such. 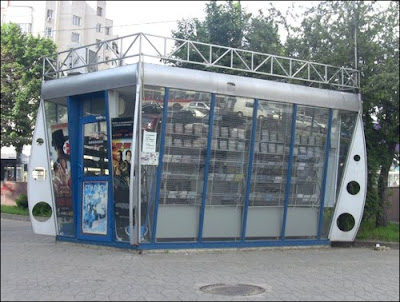 In Moldovans' defense, I have a theory. Whistling, for various reasons, is considered bad luck. As Jamie mentioned in her blog, the lady who lives downstairs from us has actually called the landlord to complain about my whistling in the stairwell. I have been whistling since I was five years old, and modesty aside, I'm pretty good at it. I would also argue that my abilities as a musician started with being able to whistle a simple tune. From there, I taught myself how to play piano by ear, and years later, I taught myself how to play guitar and bass, also by ear. Without first developing the ability to hear something and then reproduce it with an instrument that required no technical ability (i.e. whistling), I may never have continued on to more challenging means of creating music.

In other words, had I grown up in Moldova, where whistling is generally frowned upon, I may have never learned how to play an instrument by ear. As someone who has played music with many, many people in my life, I will say that in my experience, there is a marked difference between people who play by ear and those who are more classically trained. Again, this is just based on my own experiences, but people I have known who play by ear tend to play with a bit more originality, which to me, is one of the things that makes music interesting.

Most of the time when I'm whistling, I'm not whistling a song that I heard. I'm just making it up as I go along, simply because I like the sound of it. The lady who lives downstairs, however, apparently doesn't like it. But if I have to listen to techno music everywhere I go, then the least she can do is put up with the thirty seconds or so it takes me to take the trash out when I may be whistling something quietly to myself.
Posted by Zach Sands, PhD at 10:29 PM