We found a place here last week called Cowboy Chicken. The sign out front prominently featured a picture of big, juicy hamburger, so the homesick carnivore in me thought we should make it a point to check this place out. Inside, people who spoke extremely limited English were dressed in cowboy getup, complete with giant cowboy hats, while Johnny Cash blared through little computer speakers in the corners of the room. The walls were adorned with an odd collection of black and white photos of cowboys and indians, each assuming their various stereotypes as exemplified in staged poses. 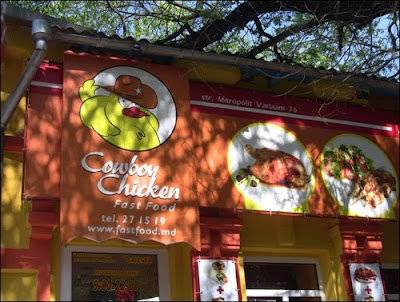 Jamie, Chloe and I each ordered a hamburger. After about half an hour, our waitress brought us what appeared to be a bun. It was cut in the middle, oozing mayonnaise. I opened it up to reveal a translucent patty of questionable meat; it tasted like it was cut with the ground up pages of a Russian phone book with some dill thrown into the mix for no other reason than to give it some kind of flavor to transcend everything that worked against it. Meanwhile, my two ounces of "meat" was swimming in about eight ounces of mayonnaise on a bun that was literally about twenty times the thickness of the patty. My first thoughts were quickly replaced by a conscious choice to not think about it anymore. It was probably best that way.

As much as I'd like to recommend Cowboy Chicken to anyone who travels to the eastern edge of the western world, who am I kidding? It may have been a mirage, and maybe I really was eating a phone book that had been smothered in mayonnaise.

Moldova has such excellent local cuisine that it seems a shame to try to "Americanize" it.
Posted by Zach Sands, PhD at 10:32 PM