When we lived in the U.S., paying bills was something we often did quickly and put as little thought into as possible. We would simply write a check and drop it in the mail, or better yet, pay online. It was easy and could usually be completed in no more than a couple of minutes.

In Moldova, bills are paid at the bank from which the utility companies have established an account. They are not delivered through the mail, but rather, by the guy who lives in the small room near the entrance of our building. Instead of having my name on the bills, they are all addressed to the building owner, who I have never actually met.

For the first couple of months that we were here, I would pay the bills as we got them, which was usually sporadically - sometimes a couple of days before they were due and sometimes a few weeks - and all total, I would make five or six trips to various banks over the course of a month to pay water, gas, electricity, cable TV, internet and phone. In the winter months, these would total approximately the equivalent of $150 U.S., and in the months when our gas bill was not as high, it would add up to about $70 or $80.

Eventually, I figured out that the common denominator among the banks listed on the bills is the Banca de Economii, which has a branch less than a half mile from our apartment. Now I wait until I have received all of our bills, then make one trip to this bank to pay all of them.

There is a reason that I prefer to only do this once a month. When I walk into the Banca de Economii, no matter what time of day it happens to be, there is always a line. Despite that there are between four and five counters open for paying bills (depending on if any of the tellers are on break), there is one line, usually 2-3 people wide, that extends back as far as the entrance, then it generally splits to both the left and right, which only adds to the confusion as to who is next. 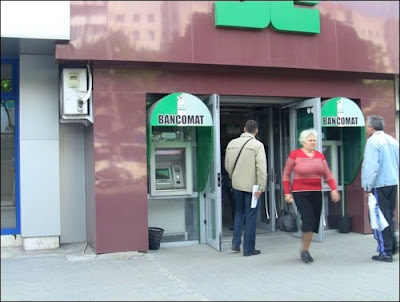 To make matters worse, there is also bench seating along the left wall, upon which most of the older people usually sit, waiting in line by proxy. Almost without fail, just when I think that I'm finally to the front of the line, people move from the bench to resume their positions in line - right in front of me. Also, there are almost always people who are clearly cutting in line. They walk in the door, then straight to the front of the line.

Luckily, every time that I have been to the Banca de Economii, there has been some random old lady who has taken it upon herself to watch over the line, presumably to make sure that everyone takes his or her turn in the correct order. These old ladies will usually call out the line-cutters, and they will point to the front when it is time for someone from the bench to get into the game. It is an interesting phenomenon.

When all is said and done, I've usually spent about forty-five minutes in line. Yes, it's all the fun of going to the DMV, once a month, with only the loosest semblance of order. Much like the DMV, though, it does provide an interesting cross-section of society, in that everyone has to go there. For this reason, it's a good place to do some people-watching.

One time, there was an Eastern Orthodox priest blessing all of us poor saps who were waiting in line. An old woman walked beside him, holding a small bucket of what I assume was holy water, into which he was dipping some kind of ceremonial tassel and then letting the water loose while monotonously chanting something in a language that I did not understand. On more than once occasion, I got pretty wet: my jacket, my pantleg, the side of my face, etc. Then he holds out his hand, asking for a donation for services rendered. Unfortunately, even once we were blessed, it didn't help the line move any faster.
Posted by Zach Sands, PhD at 7:26 AM